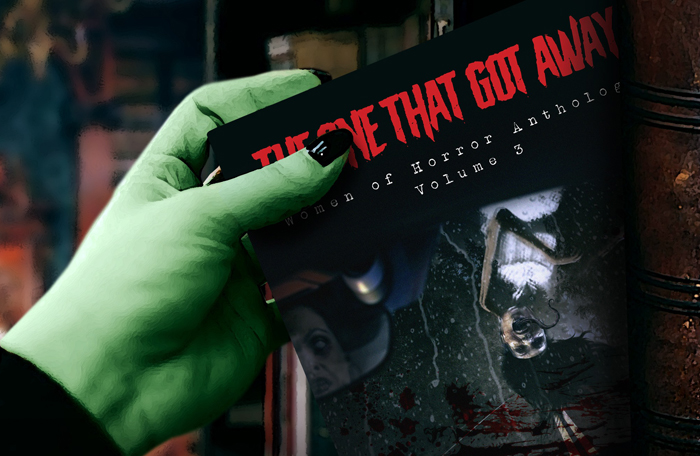 Welcome everyone, I’m The Li-Bury-An, and today we have a spotlight on Amira Krista Calvo.

When I received Amira Krista Calvo’s submission for Volume 3 of our Women of Horror anthology series, I was immediately impressed. Very rarely do I come across an author who conveys everything I’m looking for in a story. The cursed guitar, the references to Heavy Metal music, Decibel magazine and the metal bars in Brooklyn is, literally, the type of story I dreamed of having in one of our books. In the story, when her main character, Miguel, becomes obsessed with an old guitar he bought online, his girlfriend Tatiana begins to fear for his sanity.

“It had shipped from Mexico, an eBay purchase from a washed-up metalhead in Teotihuacan. The guitar was a cherry red Ibanez 1985 Roadstar, the axe of Miguel’s dreams. The seller, who was definitely un loco, said the guitar was inhabited by the spirit of Xochiquetzal, a Mayan goddess of sexual prowess and a patroness of childbirth. “Cuidadoguey, she’s pissed-off. If you don’t treat her right, she will come for your firstborn.” he wrote in his cryptic confirmation-of-purchase email. That tickled Miguel. He was thrilled it had come from his hometown. He had always been one to stay connected to our heritage, using metal as a way to communicate with the ancestors, or so he said.”

Today, Amira talks about how they came up with their story for THE ONE THAT GOT AWAY : Women of Horror Anthology Volume 3. Out now from Kandisha Press!

“Heavy Metal Coffin was born of a difficult summer in lockdown with my partner. He was going through an exceptionally hard time dealing with some mental health issues, and his greatest comfort was listening to Black Sabbath, day in and day out. I never held issue with it – I wanted him to do whatever he needed to to get through each day and I often like a bit of Ozzy. But listening to metal wasn’t always enough to keep the darkness at bay. His battle with CPTSD (complex post traumatic stress disorder) was wearing him thin, literally and figuratively, and he was becoming someone that neither of us recognised. Mental health has always influenced a lot of my fiction – the horrors of being trapped inside your brain, where no one can hear your internal cries, is a horror unique to each individual. Yet my partner’s terrors eventually started to swallow our home whole, and it became as brooding and endless as the hole in the story. It wasn’t until we decided to move homes, move cities even, in the middle of a global pandemic, that things began to change and he started to become himself once more.

The move is what made me brave enough to write the story – had I tapped into that creative part of myself using that experience as inspiration before leaving our old place in London, I may have written something far too dark to do more than place it into the recycle bin of my computer. Instead, I waited until the fog began to clear to look at this haunting experience from the outside, to fully digest and regurgitate what that experience felt like to me, to see him battle an invisible entity at the edge of hell and return triumphant. This story means a lot to me – it is more than just a scary story about obsession and a haunted guitar. It is a story of love and endless compassion – the story of a man being swallowed by a common demon, and the woman who followed him into the earth in hopes of bringing him back to the light.”

AMIRA KRISTA CALVO is a Ph.D. student at Northumbria University researching child corporeal transgression and autonomy in 1980s American biological horror cinema. They are the founder and head editor of Horror Chromatic, a website dedicated to intersectionality and the representation of LGBTQIA, BIPOC, and Disabled artists in the horror community. Their work has been featured in Horrorbound Blog, Death and the Maiden, BUST Magazine, and The Huffington Post.